Okay, I’ve posted several recipes now that call for simple syrup so I think it’s high time that I just go ahead and post my recipe for that too. Simple syrup is exactly as the name states….simple! Seriously.
The only ingredients you need are sugar and water…that’s it! Making you’re own Homemade Simple Syrup will not only save you some money, but it’s also nice to know how to do in a pinch when you realize you forgot to by it!

And simple syrup isn’t just regulated to mixed drinks! It can be used on so many different ways. Coffee, lemonades/ non alcoholic drinks, . The list goes on. Since it’s a liquid sweetener, it’s so much easier to blend into cold drinks where the sugar granules don’t want to disintegrate easily.

What Type of Sugar Should be Used to Make Homemade Simple Syrup?

Most frequently, plain white sugar is used. That is what gives you the traditional clear sugar syrup.
But you do t have to stick to that! My favorite is to use raw turbinado sugar. It creates a simple syrup that’s light brown with a hint caramel  flavor. It doesn’t mix well with all drinks.

For example, you would want to use white sugar simple syrup to make my Gin Mint Cocktail (recipe coming next week!) but I love mixing it in iced coffee.

For this recipe we’ll stick with traditional simple syrup, but if you’re feeling adventurous and want to try a different sugar, the amounts do not change. 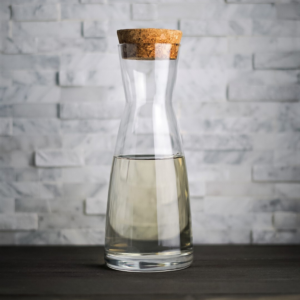 Check out my BEVERAGE recipes that you can use Homemade Simple Syrup in or my DRINK recipe board on Pinterest!